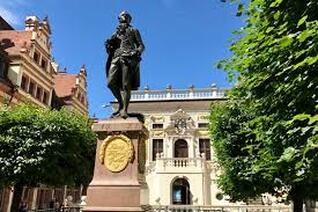 Statue of Goethe in front of the Alte Borse
​​Day 2: Monday, June 13, 2022
Meals included: Breakfast & Lunch
Walking Tour of Historic Center: “Stories and History”
A walking tour through the city center with our professional guide is a great way to discover the most famous sights of Leipzig in a short time. We'll see the St. Nicholas Church, which was the center of the “Peaceful Revolution” events in autumn 1989, the Naschmarkt and the Alte Borse (Old Stock Exchange) as well as Leipzig’s most famous passage – Mädlerpassage.  Along the way we’ll learn why the Central Train Station was made up of two halves and why Bach’s coat pocket is turned inside out. Also, what is the term “Kaffeesachse” (Coffee Saxon) derived from? And what’s the deal with Shakespeare’s stockings? You’ll learn the answers to these and many other questions during our walking tour. 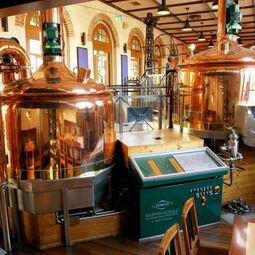 Festsaal in the Altes Rathaus
Day 3: Tuesday, June 14, 2022
Meals included: Breakfast & Lunch
​Visit to the Altes Rathaus (Old City Hall):
Leipzig’s Altes Rathaus is home to the Museum of the City of Leipzig and is one of the most important Renaissance buildings remaining in Germany. In the old council chamber Johann Sebastian Bach signed his employment contract as Cantor at St. Thomas School and Director of Music for the City of Leipzig in 1723. The only authentic portrait of Bach (by Elias Gottlob Haussmann, 1746) is on exhibition, as is an original manuscript in Bach’s hand. 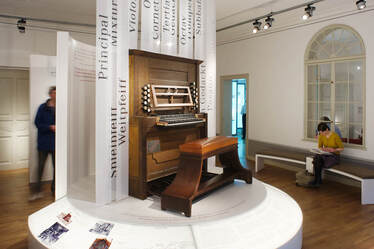 Bach Museum
Visit to the Bach Museum:
Recognized as the world’s pre-eminent center of Bach scholarship, the Bach Museum in Leipzig conveys a vivid impression of his music, provides insights into the methods and various fields of Bach research, and displays original Bach manuscripts and other precious items. The permanent exhibition is devoted to Bach’s life and work in Leipzig where he composed five cycles of cantatas, the Christmas Oratorio, the St. John and St. Matthew Passions, and the Art of the Fugue. Interactive features play a significant role: visitors may become actively involved in many facets of the exhibition. Our favorite feature at this museum: the audio guides containing musical examples, many on original period instruments, which truly bring the exhibition to life!

Mendelssohn House - Music Salon
Day 4: Wednesday, June 15, 2022
Meals included: Breakfast & Lunch
​Visit and Guided Tour of the Mendelssohn House with a Private Concert of Chamber Music:
In 1835, Mendelssohn was offered the post of conductor of the Gewandhaus concerts in Leipzig. He was only 26 at the time, the youngest person ever to take up this position. Mendelssohn was fully involved in the rich musical life of Leipzig, where he founded the first German music conservatory. And it was in Leipzig that he established the “conductor of the symphony orchestra” and the “conductor as interpreter,” revolutionizing the performance practice of the time. The Mendelssohn family moved into this flat in 1845 and it has been carefully restored to what it looked like when the composer lived there. The collection includes letters and manuscripts, watercolors painted by Mendelssohn himself, authentic furniture, the composer’s study, and the music salon - all of which bear ​eloquent witness to the era in which Mendelssohn lived.
Included:  Private chamber music concert at the Mendelssohn, featuring a string trio
Felix Mendelssohn Bartholdy: Piano-Trio no 1 in D minor
​Fanny Hensel (Mendelssohn's sister): Piano-Trio in D minor, op 11

Blüthner piano factory
​Tour of the Blüthner Piano Factory:
Since 1853, Blüthner pianos have been exclusively manufactured in Leipzig. During this private tour of the factory, we’ll witness the entire process of creating a piano, starting with the raw wood (walnut, pear, spruce), to the various veneers (mahogany, rosewood), the delicate work of regulating the action, and the final tuning. Blüthner pianos are built by hand by skilled artisans and it is absolutely fascinating to see how the piano’s incomparable sound is achieved. The company is still owned and managed by the Blüthner family and is counted amongst the oldest and finest piano makers in the world. Find out why great composers including Liszt, Tschaikovsky, Rachmaninoff and Debussy all treasured their Blüthner instruments and what makes the Blüthner sound uniquely inspiring.

Schumann House
D​ay 5: Thursday, June 16, 2022
Meals included: Breakfast & Lunch
Visit to the Schumann House with Private Piano Concert
In addition to being a monument in the history of classical music that has importance far beyond the Leipzig city limits, the Schumann House is also an important example of neo-classical architecture in the City of Leipzig. The main room, Schumann Hall, features the original 1838 decoration of the four walls and ceiling, which have survived practically intact. Thus, we can observe this room just as Robert and Clara Schumann saw it during the first four years of their marriage (1840-1844) when they lived in this house. This is where Robert Schumann composed his “Spring Symphony,” the work that first carried his fame to the outside world. Here is where Clara Wieck, the renowned pianist, developed new forms of expression, perfected her artistic nature, and set out for guest appearances as piano soloist on the concert stages of Europe.

Beethoven status by Max Klinger (1857-1920)
Museum of Fine Arts - Private Guided Tour:
Leipzig's Museum of Fine Arts was founded in 1837 by the arts association Leipziger Kunstverein. Donations by arts foundations and generous individuals have created one of the largest collections of fine art in Europe, with works from the late Middle Ages to the present day. On our private guided tour, we’ll discover over 500 years of art history alongside the Old Masters Frans Hals and Lucas Cranach, works from the Romantic Period by Caspar David Friedrich and Andreas Achenbach, and a wide range of contemporary art. The museum’s extensive collection of Cranach paintings is unique in the world. The museum building is also of architectural note: an impressive 110-foot-high glass cube with a vast entrance hall filled with natural light. 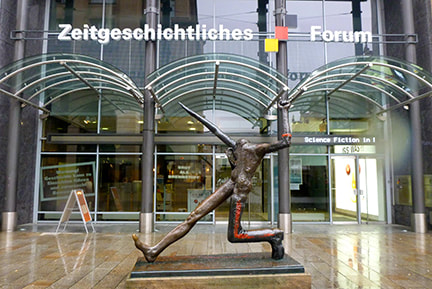 Forum of Contemporary History
​Day 6: Friday, June 17, 2022
Meals included: Breakfast & Lunch
Private Guided Tour of the Forum of Contemporary History:
The Forum of Contemporary History commemorates
the history of political repression against opposition
and resistance in the context of the division of Germany following World War II. The exhibition provides a fascinating view into the daily lives of East German citizens under the communist dictatorship. The museum’s permanent exhibition focuses on repression, citizen resistance, and the events that ultimately led to the “Peaceful Revolution” of 1989. This exhibition draws on a collection of more than 3,200 objects, photos, and documents. The Forum makes history palpable, including an unforgettable presentation on the history of the Soviet Occupied Zone, the German Democratic Republic and the historic developments since 1989.

Fischerarthaus, Südvorstadt
Lunch: Culinary Walking Tour of the Südvorstadt
Once an industrial area of the city, the Südvorstadt today has an urban edge and a BoHo/hipster vibe. It is a center of modern art and contemporary culture. Experience this colorful and lively area of Leipzig, where people live in magnificent Art Nouveau buildings and enjoy the culinary diversity around the ‘Südmeile.’ On this cuisine and culture tour, you’ll have the opportunity to try tasty samples from specially selected establishments. You’ll learn about history and architecture as we encounter modern fusion cuisine as well as traditional fare such as Leipziger Lerche. Our guide can also provide restaurant recommendations for your stay in Leipzig.
​This is a great opportunity to get to know Leipzig through its food, culture, and people! 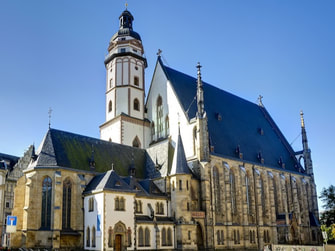 St. Thomas Church
​Day 7: Saturday, June 18, 2022
Meals included: Breakfast & Dinner
Saturday morning and early afternoon are free time for you to get out and explore the beautiful city of Leipzig on your own, do some shopping, or just relax.